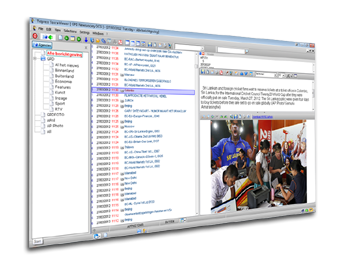 Telpress TOSCA Viewer 6 it's your professional news terminal. All your news content in a dedicated platform. 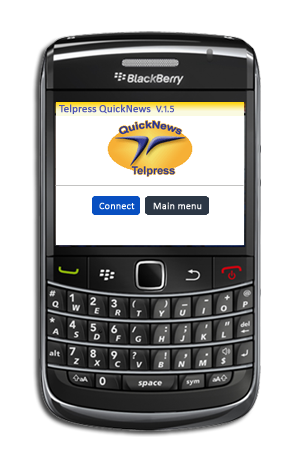 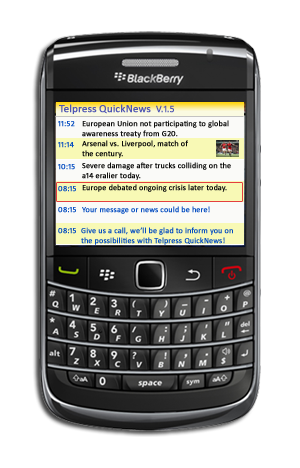 Once connected, Telpress QuickNews automatically pushes the latest headlines to your mobile device on basis of your personal keyword profile.And will keep doing so while you stay connected! You'll never miss a single story... 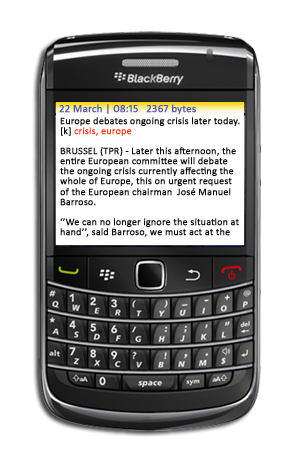 An opened article is easy to read and accompanied by the matched keywords near the title. 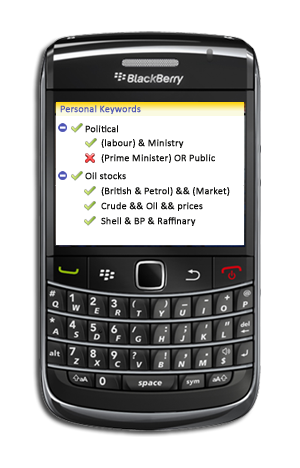 Extensive keyword profile. News are scanned with boolean operators and can be grouped for easy access. 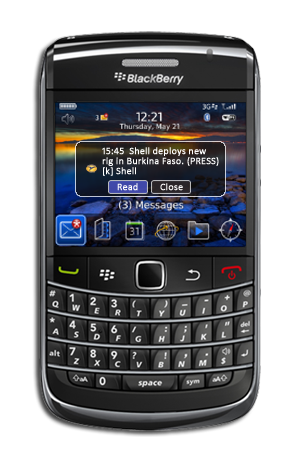 Special feature on the Blackberry, by pressing the 'B' key, Telpress QuickNews runs in background, but still alerts when a news hits your profile. 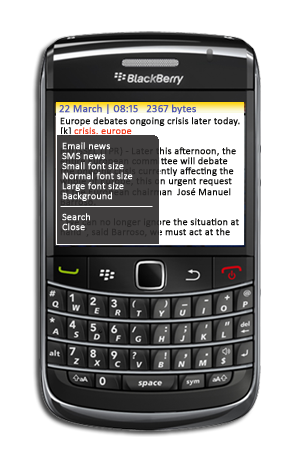 From each individual article, QuickNews permits to send the article straight away via either E-Mail or SMS. This is particularly handy if you need to notify someone quickly. 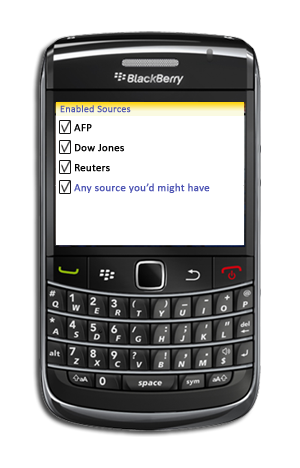 If you receive multiple sources, you can enable or disable them at your desire. Telpress QuickNews can accomodate virtually any source of information, both textual as multimedia content, including your own sources. Call us for the possibilities. 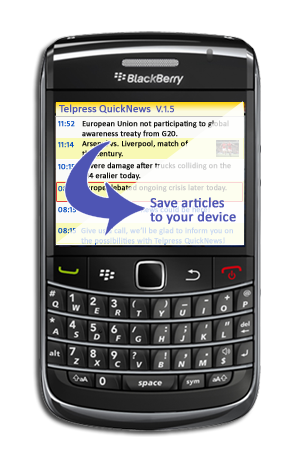 Save any article to a local archive with a single click. This enables you to read content without any data connectivity present on your device. For instance when you are travelling by plane. 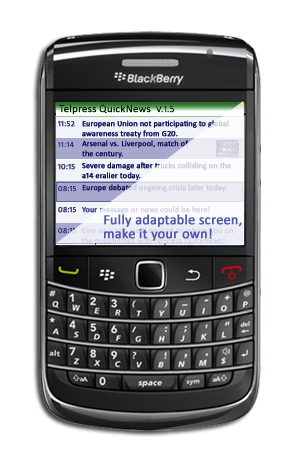 Telpress QuickNews is fully adaptable in it's styling. Change any color, font, action or alerting methods. You are in control.


Complete and powerful real-time news terminal for redactional systems and press offices. This news terminal is what professional journalists and a press officers use in order to carry on most of the daily news-monitoring activities. It integrates seeminglessly in a Windows environment either desktop or notebook and it simply does the job. Used by thousands of journalists around the world, Telpress TOSCA Viewer is the journalists best work companion after a pen and a notebook.

The news monitoring activity today consists in screening thousand of news items delivered in many different formats and often it becomes a struggle to organize the feeds efficiently and with a robust application, this is what TOSCA Viewer is designed to do. Despite the availability of many web based news terminals, which we proudly develop and distribute, TOSCA Viewer still represents the most complete, powerful and versatile news-terminal available today. It supports every type of newsfeeds, including multimedia feeds with video's, photographs and infographics and can be deployed in existing editorial systems.

The versatility of Telpress TOSCA Viewer allows news editorial organization to empower their newsroom but also to re-distribute it to their subscribers. It's available for 64 and 32 bit Windows based Operating Systems and can be deployed on large networks and newsrooms in simple steps thanks to its centralized accounting system which pushed the end user configuration at the first connection.

TOSCA Viewer gives you all necessary power tools to consult multiple and multimedia newswires with minimal effort in a efficient a self organizing environment. It is fully customizable, permitting to personalize the screen in the most suitable layout depending on taste and necessities.

TOSCA Viewer is used by news organizations worldwide as well as many private companies and local governments.

Step into the cloud of video analysis with this simple, fast and reliable online user interface. This platform is intended for annotating, analyzing, tagging, clipping, searching and sharing your video and audio.

The ultimate freedom to your news monitoring tasks. Telpress QuickNews Mobile Edition it's a powerful real-time news terminal available for mobile phones and smartphones. It integrates in your phone and runs also in backgroud mode providing visual and audible alerts.
More..

A family of products for reading and managing news in a web environment. It's no surprise that today's most powerful technologies are fully available on-line. Telpress T-Web was initially a single web-based platform used by many news providers to distribute content on the web and it's now grown into a full collection of web infrastructures empowering news providers to publish sell their content online safely and timely. Discover more here.